[SINTRATEC] FabRX – Use case “Medical tablet solutions for the future”

PERSONALIZED AND 3D-PRINTED: OUR FUTURE MEDICINES

FabRx is the world’s first company using selective laser sintering to prepare medicines. Thanks to the pioneering work of the British spin-out from University College London (UCL, 7th place in the world QS World University Ranking), medicines will be 3D printed in the future.

At Heathrow Airport we take the Piccadilly Line and drive to Russel Square. In the university quarter, which is in the middle of Central London, pubs and student cafés line up next to each other. It is sunny and quiet as we reach the UCL – School of Pharmacy. Fabrizio Fina awaits us wearing a white laboratory coat. The pharmacist who is originally from Italy leads us into a clean tidied research laboratory on the second floor, which is equipped with various 3D printers: selective laser sintering (SLS), semi-solid extrusion (SSE), stereolithography (SLA) and fused deposition modeling (FDM) or fused filament fabrication (FFF). The PhD student in Pharmaceutics is working in collaboration with FabRx on the development of ‘Printlets’, the name of these innovative 3D printed tablets of the future. Fabrizio quit his former job in a pharmacy in Abruzzo (Italy) to pursue a more challenging career abroad.

NEW RESEARCH FIELD THANKS TO SLS 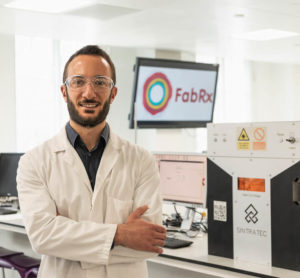 In the laboratory, Fabrizio fills the powdered material into the printing area of an SLS printer (Sintratec Kit) and starts Sintratec Central, the user software. He started working on 3D printing in 2015 during his master’s degree at UCL, where he was involved in a research project dealing with the development of oral printlets by FDM. We are amazed at how quickly he has prepared three printlets consisting of a blend of pharmaceutical polymers, drug (paracetamol) and a colourant commonly used in pharmaceutical industry for tablet coating. “In 20 minutes I can print 20 tablets” he spontaneously mentions and continues: ”SLS technology has huge potential. In just two years, we have achieved extraordinary results with it. The Sintratec Kit has opened a new field of research for us”.

Two years ago, the first printlets manufactured by SLS with only pharmaceutical grade components, showed that the incorporated drug did not degrade during the sintering process – as it had been previously mistakenly assumed. After the laser sintering process, the drug remained 100 percent intact. A milestone was reached. Fabrizio remembers: “We were surprised and realized that we could evaluate many other drugs based on this knowledge and that thanks to the precision of the laser we would be able to manufacture innovative shapes”. The Sintratec Kit, which was initially purchased only for testing purposes, helped to greatly broaden the research opportunities of the group and to drive innovation forward. 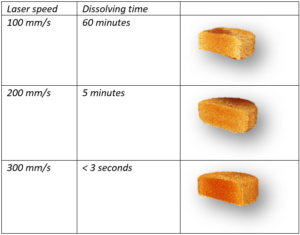 Fabrizio has just launched a new print job with a relatively fast laser scanning speed of 400 mm/secwith the aim of preparing fast dissolving tablets. During the sintering process, the powder particles connect to each other (sinter) on the surface. Differently to conventional manufacturing process where tablets are made by compression of powders, SLS does not require compression, the powder particles are connected by necking and empty spaces are left inside the printlet. Due to the porous structure, water can easily enter into the printlet and break the powder particle connections apart within seconds.

With a smile Fabrizio mentions: “We look for the opposite of conventional applications of 3D printing in engineering where robustness is expected. We are making medicines and we want our materials to break or dissolve quickly in the gastrointestinal tract or in the mouth with a sip of water”. Such features are highly desirable in the pharmaceutical field. Conventional oral disintegrating tablets take usually between 30 and 60 seconds to disintegrate, but SLS shows an advantage over the conventional manufacturing processes by enabling a quicker disintegration time.

The precise selection of the parameters in the Sintratec Kit gives the academics great freedom to research. Fabrizio explains: “By finely changing the printing parameters and/or the composition of the powder mixture, we can personalize the dissolution time of the printlets as we desire”. This can range from a few seconds to over 24 hours, or even days if implantable devices are printed.

To further reduce the dissolution time, Fabrizio developed printlets with lattice structures. Due to their large total surface area, printlets with a gyroid (type of lattice) structure dissolve much faster than those with a cylindrical shape. Such complex structures would be impossible to be manufactured using conventional production methods. Among the SLS printers, the Sintratec Kit is particularly suitable for laboratory applications due to its design: “An SLS printer with a strong laser might degrade the drug and a large printing platform would be an inconvenient for us in terms of material preparation and handling during the development phase”.

In order to prevent thermal degradation of the materials, the process temperature must be as low as possible. A remarkable feature of the Sintratec Kit is the possibility to operate at room temperature. FabRx has evaluated several polymers that enable sintering under the desired conditions. This achievement has pleasant consequences in practice, for example, the warm-up time of the 3D printer is short or absent, and the 3D printed objects can be immediately de-powdered without cooling down time.

After lunch, Professor Simon Gaisford, Head of Pharmaceutics at University College London and co-founder of FabRx, enters the laboratory and explains his vision about the Sintratec technology: “Selective laser sintering offers great potential in the pharmaceutical industry. This allows tablets to be manufactured without using binding liquids (as binder jetting technology uses).” This is an important advantage because these binders might interact with the drug.

SLS technology offers significant advantages, particularly in the case of so-called polypills – i.e. tablets containing several drugs. For example, it is convenient for the patient to take one polypill a day rather than several single tablets.

Professor Gaisford addresses another point: “For economic reasons, the pharmaceutical industry pays less attention to the production of medicines for small patient groups.” 3D printing technologies make it much easier to produce personalized medicines for rare diseases, small patient groups or for children and the elderly. For these targeted groups, drugs can be precisely dosed according to the treatment specifications. This would solve the problem of the limited dosages strengths available in the pharmacies.

SLS AS THE DRIVING FORCE OF RESEARCH

When FabRx put the first Sintratec Kit into operation in 2017, it only took a few weeks for the first printlets to be produced. Following on from these initial successful results, numerous research publications and an academic book have been published.

In the FabRx laboratory, since having bought the Sintratec Kit, it became one of the favourite research tools. Professor Gaisford summarizes: “The Sintratec Kit is a very robust system and really easy to use. As we have been able to develop many new products and continuously come up with new research ideas, we have installed a second Sintratec Kit”. Both SLS printers are used on a daily basis.

In the future, FabRx wants also to develop an alternative 3D printing system for high throughput production in cooperation with the pharmaceutical industry. Fabrizio tells us: “We are now looking to other formulas that will make the difference.” Should the SLS-3D printers ever make it to pharmacies, the 3D printing specialist might consider going back to the community pharmacy to bring innovation. Either way, SLS will revolutionize the health care with new formulations.

“SLS will play an important role in the pharmaceutical industry in the future.” 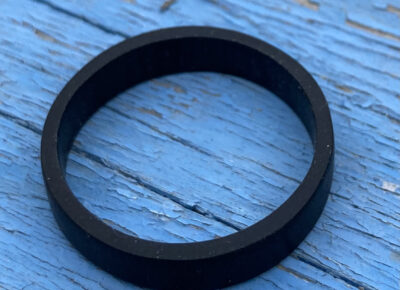 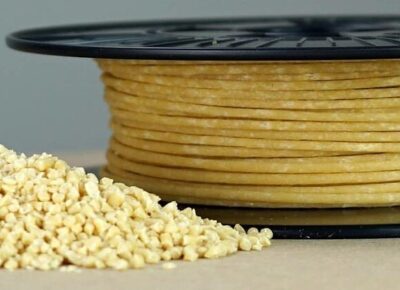